At Energy Concepts, we help reduce the carbon footprint and energy use of our customers. Solar panels can provide free electricity from the most bountiful energy source we have access to, the sun. However, even with a solar panel system, it’s essential to have an idea of how much electricity you are using in the first place. This blog will explain how much energy use is typical for the average California household and offer some simple tips to lower your energy expenditure.

While the idea of a carbon footprint is referenced a lot, it can be difficult to determine because it’s hard to know how detailed you should be. For example, the roads we use to walk, bike, or drive on were created by processes that involved burning fossil fuels. To simplify things, we’ll go over the typical household energy expenditures in California. Just keep in mind that this might not tell the whole story of your carbon footprint and overall energy use.

California has a lovely mild climate for most of the year. Due to this, we use less energy on air conditioning and space heating than the average American household by a relatively large margin. Our great weather is the main reason why Californians spend less on energy overall than average. Almost a majority of your energy budget, on average will go towards general electricity. Appliances like your refrigerator and microwave, televisions, and phone charging, end up taking over 40% of the average Californian’s energy budget. Water heating and space heating take up the next most at about 25% each. Lastly, air conditioning takes up a small portion of the total at less than 5%. Below is a graph with data from the Environmental Information Administration that gives a good visual breakdown. 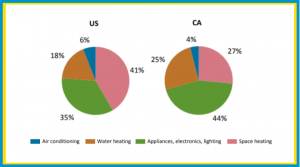 So, we understand that Californians use less energy than average and that it is distributed differently than in other states, but what are some of the reasons for this beyond the difference in weather. There are quite a few theories about this.

Why Californians Use Relatively Little Electricity?

You may be wondering why something like solar panels, which allows you to generate free electricity, is so popular in California if we use less electricity than in other states. Just because we use less doesn’t tell the entire story. Actually, California’s electricity costs are some of the most expensive around. We just use so much less that it ends up still being lower. There are a number of reasons for this.

One that people often point to is the unique regulations in California. Our state has led the way in green energy policy and requires power companies to distribute electricity efficiently. In other states, the pricing isn’t necessarily tied to efficiency. In addition, homeowners in California are incentivized to choose appliances and systems that require less energy. This focus has led to less energy use overall. However, there are a number of other factors too.

One truth about energy use that is fairly constant throughout the country is that the more people in a household, the less energy use per person. This makes sense intuitively. A one-person household will still need to heat their home. In a larger household unit, that cost is effectively shared when calculating energy use. Californians tend to have larger household units because it is expensive to live here. You’re much more likely to have roommates in our state than in some others, where homes are a much more viable investment.

Other Sources of Energy Expenditure

We just went over household energy use, which is something you have a lot of control over. However, the other aspects of California’s energy use should be mentioned, too. The largest source of energy expenditure is from transportation. Californians fly a lot, which uses an immense amount of energy. Additionally, our crowded highways are home to thousands of energy-consuming cars. These are some definite areas to consider when trying to cut down on your general energy use.

What Can You Do to Lessen Your Carbon Footprint?

We believe in solar as the future of energy generation. California has understood this for years and made efforts to encourage more California homes and businesses to utilize solar energy production. Not only does this decrease your energy bills, but it can lessen your reliance on outdated energy infrastructure. We are even seeing solar energy spread to other sectors of the economy like transportation and industry. The amazing thing is that it’s even attainable for the average homeowner.

Where Do We Go From Here?

The future is bright for solar in California. While some parts of the country are spending more and more every year on energy, as a state, we are leading the way. With more solar capacity than any other state, we still have a long way to go. If you want a solar panel installation, you can rely on the experienced team at Energy Concepts to get the job done.

If you want to stay on the cutting edge of energy generation, you can improve your home’s energy infrastructure by installing a solar battery. These systems hold on to electricity generated during the day for later use at peak hours and at night. This can reduce your reliance on the grid to almost 0%, which is incredible news. This is the next innovation in solar energy, and we’d love to help you realize it in your own home!